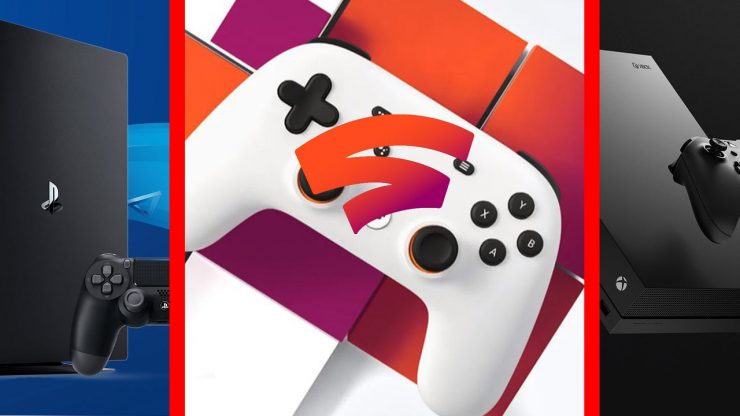 PlayStation 5 vs Stadia vs Project Scarlett – Whats Meant for You

Everything necessary that one needs to know about the consoles being released in the near future for gaming purposes will be covered. Their prices, specifications, features, costs and release dates. As none of these are released yet their overall comparison may not be possible but the information present to us will be briefly explained below. I will try to answer the most difficult question : Which gaming console should you buy ?

We will start things off with Google’s Stadia as it is the new emerging rival of Sony’s PlayStation and Microsoft’s Xbox.

Stadia is a gaming service presented by Google to its users through Cloud Storage. Stadia is a system used to stream games such as Assassin’s Creed Odyssey to your phone, tablet, PC or TV with Chromecast plugged in. This means that the user won’t have to install any game on the platform they are using to access Stadia. Known as Project Stream (not hard to guess why) in its development, this service was debuted through the closed beta running Assassin’s Creed Odyssey in October 2018. Without further ado let’s dive into its specs:

There are three different pricing options available to you right now:

At E3 2019 Google Stadia was giving hands-on experience to people. The game available to them was DOOM Eternal. The game was smooth and people felt they were playing locally but the image quality had issues. The conditions would have been optimum but yet it wasn’t able to achieve 60 FPS which gives rise to the question that “Is Stadia good enough for fast paced games?“. When the player moves his camera the picture and environment becomes blurry and went fuzzy with compression artifact. Visual clarity and ultimate performance are paramount features of Triple-A games and if not at disposal of the user it makes a person wonder if it is the ideal choice for such games.

When Stadia was in Beta, the overall reviews were very positive and was surpassing expectations of reviewers. “The Verge” tested it and found no lag issues over a wired ethernet connection but even on a wireless connection it could not achieve the 4K resolution and the environment went muddy. “Ars Technica” remarked Stadia’s login sequence was far more simpler than other services.

Stadia is completely based on Internet thus a connection would be compulsory to play games. Varying Subscription and Internet Speeds also affect the game’s performance. A game quality comparison with internet speed is listed below:

Google is also offering a dedicated stadia speed test service (you can do also do a speed test on SpeedCheck.org) to everyone which would help a person see their internet speed and what gaming gaming experience to expect.

List of games that will be available at the time of Stadia Launch:

Project Scarlett is the development name of Xbox Two. In 2018 VP of Gaming at Microsoft Phil Spencer said that “scarlett” would include a low-end model code named “Lockheart” however after some time Spencer stated that “Scarlett” would be a single console. Secondary code name “Ananconda”

Lockheart was to be a cheaper replacement of Xbox One S but due to Spencer’s statement Lockheart might be out of the way and Anaconda will be the successor of Xbox One X.

It was confirmed that the new console will be armed with the latest chipsets and architecture from AMD. This will allow the console to reach 8K resolution and run games at 120 fps.

All of these specs are from what’s expected, leaked or confirmed. So this may vary from what Xbox will have to offer upon release.

Microsoft also stated that “Scarlett” would be 4 times as powerful as Xbox One X. Spencer committed to continue the support of physical distribution of game discs on Scarlett. Backward’s Compatibility will also be a main feature of Scarlett. All existing Xbox One titles as well as the Xbox and Xbox 360 titles that it had made compatible with Xbox One will be compatible with Scarlett. To make this goal possible Microsoft has confirmed that it has stopped adding any new titles to it’s backwards compatibility program so it can focus on Scarlett’s backwards compatibility feature. All existing Xbox One accessories are expected to work with Scarlett. Xbox Game pass will surely be a part of Scarlett. (Microsoft’s Game subscription service). Project xCloud will also be part of Scarlett. Real time Ray tracing will also be a part of Scarlett which will drastically improve game’s visuals.

Project xCloud is the streaming platform for Xbox which was debuted in March. This can help users to stream their games and media to their connected devices. According to Phil Spencer its Beta feature will be widely available in October. This feature of Microsoft’s Xbox is supposed to be the contender of Google’s Stadia and Sony’s Remote Play. However the three of these haven’t yet been head-to-head with each other for now therefore we can not compare them.

Some games will be available after the backwards compatibility program of Scarlett has been completely made:

PlayStation 5 (PS5) will be the successor of PS4. This is a gaming console brought to you by Sony Computer Entertainment. Sony opted for the decision to skip appearing on the E3 2019. No matter how much Sony tries to keep secrets with the release date getting closer only a particular set of information can be concealed. Pretty impressive things have surfaced such as loading time comparison of PS4 Pro and the next-gen console. More stress on Remote Play feature. Backwards compatibility which could emulate games upto the original PlayStation. Here is everything we know about PS5.

PlayStation 5 is backwards compatible and atleast all PS4 titles will be able to run on PS5 and it is also said that PSVR hardware may be able to emulate even the original Playstation titles. Sony also confirmed that its “incredibly powerful” backwards capability will let PS5 players to play with PS4 players Online. In their video they also showed incredibly fast loading times of next-gen console by comparing PS4 Pro and PS5’s loading times due the new SSD. It is said to be 19 times faster than that of the old SSD’s. Audio will also reach “Gold Standard” on PS5 according to Mark Cerny who is Lead System Architect at Sony, with the grace of new audio engine that will deliver immersive sound. Yes, ray tracing will also be functioning in PS5. This would help reach “dramatically improved graphics rendering” power.

Remote Play has been stressed upon by Sony and is expected to be the integral part of PS5. Remote Play feature was already available for PS4 which would allow people to stream from their console to a computer, smartphone, tablet or PS Vista handheld console. Sony surprisingly doubled down on its underused Remote play feature which might have been a tactical decision due to increase in Microsoft’s Project xCloud and Google’s Stadia. Sony also stated

The evolution of Remote Play would provide a seamless game experience anytime, anywhere.

None of the games have been officially announced except that backwards compatibility ones. However this doesn’t stop us from looking forward to seeing these games on PS5:

† Price estimated by finding the difference of previous console releases.
§ Minimum spec listed, it may vary upon launch

Which Console Is Meant For You

The choices are overwhelming but the budget and time may not be but still I recommend opting for Google Stadia if you meet their Internet standards. Stadia will save you all the money which one has to spend on the console, and you can check out Stadia services by opting for ‘Stadia Base’ which is free to subscribe and you just pay for the game which you buy. You can always step it up a notch by paying for a month’s subscription for $9.99 and try it on any platform like your PC, TV e.t.c with access to a library of games.

Microsoft is open to cross-platform play but Sony is openly against this idea which causes problems for PlayStation fans wanting to play with their friends. PS community should encourage cross-platform play. If the feel of a console is a must for you, in that case the comparison shared in the above table hints towards Xbox Scarlet as being better when compared to PlayStation 5, Although RAM and HDD of PlayStation 5 are still unknown and it can be a game changer once announced.

In the end though it all comes down to personal preference and play style. Good luck with choosing your new platform!