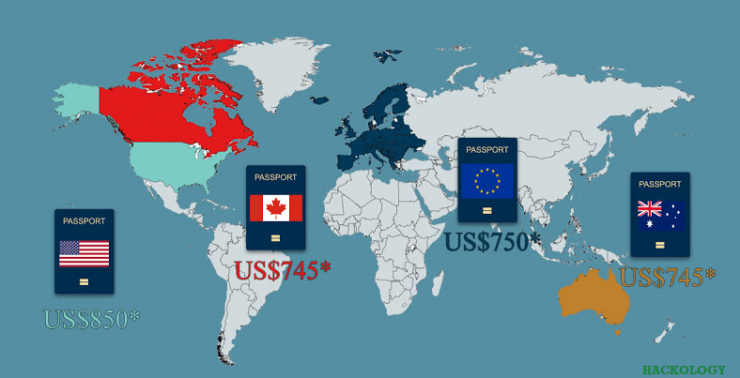 We all have seen how fake identities are made but that all was shown to us in the movies. How about If I say its possible and very cheap. Want to get a new identity ?. In recent years, it has become much easier to acquire a new identity on the darknet. Darknet provides users with unprecedented access to fake and stolen personal documents, which currently do not cost as much as one might have expected.

Specialists from SafetyDetectives visited several underground trading floors on the darknet and compiled the average cost of the documents needed to start a new life with a completely new personality. Although there is almost always a payment option with currencies such as US dollars, many of the underground sites accept payment only in cryptocurrency i.e. Bitcoin (BTC) etc. The cost of a complete new identity varies from country to country since it includes a new passport, driver’s license, birth certificate, diploma, financial data and fake money.

The average cost of a new person, depending on the country, is $2048. The standard of living in different countries is different and the purchase price of forged document depends on many factors, including the difficulty of obtaining documents, the source of data, the authenticity and the estimated value of the standard of living in the country allegedly issued the documents.

The average cost of acquiring a new identity in countries is:

There are two types of passports being provided on the dark web. As experts noted, passports advertised as “registered”, “genuine” and “able to pass verification” were more expensive. The simplest fake passports, as a rule could cost the buyer only $10. The average cost of a genuine passport purchased on the darknet is:

Although the price of a European passport on the darknet is an average of $750, each country has its own number of factors affecting the cost of forged documents. According to the research, a fake Norwegian passport ($800) will cost the most, followed by Switzerland ($764), the Netherlands ($745), Germany ($745), France ($745) and Spain ($690).

Digital identity theft is not the only way of faking an identity and a real life forged identity can also be obtained on the Dark net with supposed guarantee that it can pass verification. What will be your Fake name if you ever get another identity ?

Bitcoin makes it to Tesla!