​Achieving fame and wealth on YouTube is no easy feat — most creators toil for years, only gain hundreds or a few thousand followers (Hackology is one example) and earn a negligible amount of money for their efforts

Although PewDiePie (Yes , the same whose name was printed on 50,000 Hacked Printers ) is the #1 YouTube Channel with 74.1 million subscribers but his not the #1 earner on YouTube ,rather he comes at #9. Who is at the top in earnings ? 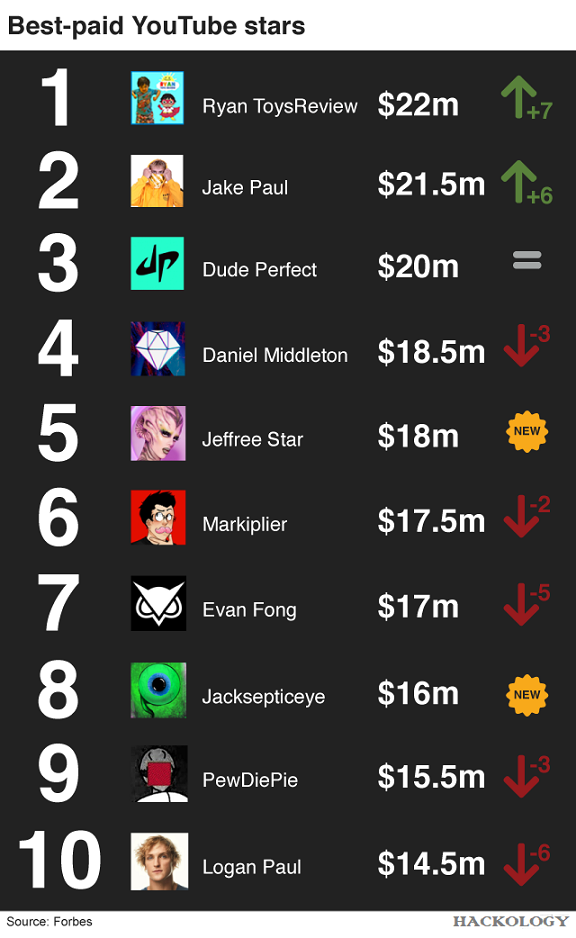 Yup, Ryan Toys Review , featuring a 7 year old kid (who turned 8 now) who shows about a new toy everyday and now has his own merchandise which makes most of the profits.

How we know Who Earned What ?

Forbes has calculated while all earnings estimates are from June 1, 2017- June 1, 2018. Earnings estimates are based on data from Captiv8, SocialBlade and Pollstar, as well as interviews with industry insiders. Results are at the mercy of Forbes and we might even see a response by YouTube or any of the Youtuber in their future Videos.

It makes sense to earn if you are in the gaming business and doing commentary or whatever on your channel with online games. It would even make sense if you are doing Tech reviews of the latest gadgets . but Ryan ToysReview performs reviews of cheap plastic toys, so how that channel earns that much with only 1224 Videos ?

Must Read:  Goodbye to Linux for new OS Fuchsia - Google

The Answer is the “Audience“, audience of Ryan ToysReview are kids and kids are the best customers to get your message across and sell your stuff. Ryan Toys Review is also available on YouTube Kids App while all the other 9 Youtubers are NOT.

Since the channel was set up by Ryan’s parents in March 2015, its videos have had almost 26 billion views and amassed 17.3 million followers. Forbes said all but $1m of the $22m total is generated by advertising shown before videos, with the rest coming from sponsored posts.

When asked the kid why his channel is a success

Because I’m entertaining and I’m funny.

His Dad who does most of the editing when the channel started must be thinking its his clever start , but you gotta give it to the kid who after all is a star 😉

Do you earn on YouTube ? What is your strategy ?