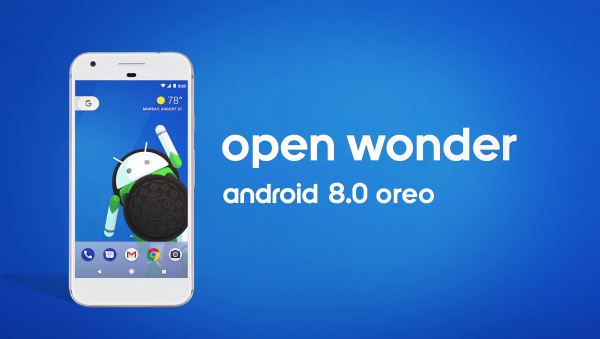 Android 8.0 Oreo is here with the Eclipse

Google has launched Android 8.0 code-named Oreo as everyone was busy watching the Eclipse.

The latest version of Android that’s smarter, faster, and more powerful. Android Oreo gives you many new ways to extend your app and develop more efficiently.

2x faster : Get started on your favorite tasks more quickly with 2x the boot speed when powering up
Background limits : Android Oreo helps minimize background activity in the apps you use least, it’s the super power you can’t even see.
Android Instant Apps : Teleport directly into new apps right from your browser, no installation needed.
Emoji : Share the feels with a fully redesigned emoji set, including over 60 new emoji.

We had this feature in our laptops , but now we can have the same built in support that even if we exit an app and go about doing something else , our camera will be showing our video and will also play the other side.Android 8.0 (API level 26) allows activities to launch in picture-in-picture (PIP) mode. PIP is a special type of multi-window mode mostly used for video playback. PIP mode is already available for Android TV; Android 8.0 makes the feature available on other Android devices.

Android 8.0 they have redesigned notifications to provide an easier and more consistent way to manage notification behavior and settings. These changes include:

Account creation, login, and credit card transactions take time and are prone to errors. Users can easily get frustrated with apps that require these types of repetitive tasks. Android 8.0 makes filling out forms, such as login and credit card forms, easier with the introduction of the Autofill Framework. Existing and new apps work with Autofill Framework after the user opts in to autofill. Might be a security hazard , but this option will be protected with pin / finger sensor verification by default.

Must Read:  5 Important Features of Android VPN & ExpressVPN Giveaway Inside

Stock support for downloadable Fonts built in , will allow App developers to make less heavy apps so they will take up less system resource

Android 8.0 adds support for Wi-Fi Aware, which is based on the Neighbor Awareness Networking (NAN) specification. On devices with the appropriate Wi-Fi Aware hardware, apps and nearby devices can discover and communicate over Wi-Fi without an Internet access point.

Android 8.0 provides APIs that allow you to customize the pairing request dialog when trying to pair with companion devices over Bluetooth, BLE, and Wi-Fi. For more information, I can see that this will be used very effectively in social engineering hacks in future.

The biggest change to the foundations of Android to date: a modular architecture that makes it easier and faster for hardware makers to deliver Android updates. A very positive step which will further make Android more stable and robust with timely updates

API that allows you to share files across the Internet via web links. How this will turn out to be in real scenario can only be told after its wide use.

My take on how Hackers will Hack Android Oreo Users