Google Doodles – As Serious as it can get

Google’s Jennifer Hom works on a Wacom tablet to create a logo marking the 25th anniversary of the Buckyball’s discovery.

MOUNTAIN VIEW, California : They’ve celebrated Pac-Man’s anniversary, Einstein’s birthday, the World Cup, the Fourth of July, Persian New Year, the Olympics, U.S. elections, and just about everything in between. Who are they? Google’s Doodlers, of course.

A band of artists whose job it is to translate special events into those colorful, whimsical versions of Google’s corporate logo, the Doodlers almost certainly have one of the best jobs in the world.

This team’s members mix artistic skills with an ability to fit into Google’s culture–meaning they can speak engineering and hold their own among the uber-geeks–in order to do the one thing at Google designed specifically to put a smile on people’s faces the world over.

A little context first. In 1998, Google co-founders Larry Page and Sergey Brin decided to spoof the whole “out of office” idea by putting up a Burning Man logo behind the Google site’s corporate logo while the two were at the annual arts festival in the Nevada desert. “While the first doodle was relatively simple,” a corporate history of the Doodle recalls, “the idea of decorating the company logo to celebrate notable events was well received by our users.”

In 2000, “Larry and Sergey asked current [Google] Webmaster Dennis Hwang, an intern at the time, to produce a doodle for Bastille Day,” the history continues. “Pleased with the result, Dennis was then appointed Google’s chief doodler and doodles became a regular occurrence on the Google home page.”

Today, the team is made up of five people–chief doodler Micheal Lopez and doodlers Susie Sahim, Jennifer Hom, Ryan Germick, and Mike Dutton.

It’s notable that the doodle was running globally because just a fraction of the total creations are meant for a world audience. Most of their work is aimed at specific countries and celebrates local events, such as the birthdays of those countries’ famed composers, scientists, and artists or national days of independence.

Regardless of whether a doodle is meant for the eyes of billions or just a fraction of that, Lopez said, the creative process is basically the same: the team tries to find a way to conceptualize the event and then tries to find the most fun representation of that idea.

Each year, the team creates about 200 doodles, and with each, it tries to instill Google’s technology and its culture.

“The company feels pretty good about it. With all our products, we think of the user first, and this is another example where we really enjoy sharing….We get to have a human hand in our company as part of our interaction with users,” said Germick, who led the Pac-Man effort.

Checking the facts
With huge audiences viewing the doodles, those on the team know that it’s important their work accurately represents the subject matter. Because if they get it wrong, the public will let them know.

For example, said Lopez, when the team put out a doodle commemorating the discovery of DNA, “we actually had drawn the double helix the wrong way…Scientists started writing us…[and] we revised it on the fly.”

That’s why, Germick said, when working on a doodle celebrating Pi Day–March 14, or 3/14–“I made sure to get a Princeton Ph.D.’s check on my representation of different geometric equations before I pushed [the doodle] out to hundreds of millions of users.” Now thats what i call Research.

While team members will often have days, or even weeks, to finish their creations, that’s not always the case. Hom recalled the day when water vapor was discovered on the moon, and it was decided that the team should get a doodle up that same day. “It looked like we had inside information,” Hom said,”but really, we were reading the news.”

When the so-called ‘missing link’ fossil was found, the team put up this logo within hours.

When the so-called “missing link” fossil, was found in 2009, paleontologists felt it might fill in holes in their understanding of primate evolution, and the news created a splash worldwide. At the time, several of the Doodlers were at an awards ceremony in New York. But this piece of news was considered such geek manna that it was decided on the spot that Google needed to put up a doodle celebrating it. There was no time to lose, Germick said. Within hours, the resulting Doodle was bringing word about the fossil’s discovery to untold millions.

Concepts
While the Pac-Man doodle would have made the news any time, it was particularly notable because it was the first example of a special logo that was fully playable and interactive. But over the years, the team has experimented with a number of dynamic doodles. Among them are the celebration of Isaac Newton’s birthday in which an apple falls from a tree, a UFO’s creation of a series of crop circles, and one that people could click to collect candy wrappers. That one, of course, ran on Halloween.

After about half an hour of sharing the history of Doodles, it was time for the team to get down to business: discussing current projects and giving one other feedback on their progress.

Generally, one person is assigned a specific doodle, and each usually works on two or three at a time. This means that as a team, they can make progress on a lot of doodles at once.

The first concept doodle they discussed was one that was scheduled to–and did–run in Russia on August 19 celebrating the 50th anniversary of the space flight of Belka and Stelka, the two Russian dogs who became the first animals to go into space–and return alive.

Sahim was creating it. Her design, was inspired by the famed Nintendo franchise, The Legend of Zelda.

At this point, just two days prior to the doodle’s publication, Sahim had already gotten the sign-off from a Google marketing manager in Russia, who had reviewed and approved it.

Next up was a doodle celebrating the 205th birthday of Danish ballet dancer and choreographer August Bournoville, which was scheduled to–and did–run on August 21.

This is one of the doodles–celebrating August Bournoville–that the team discussed during CNET’s visit.

Dutton explained that he had wanted to give the doodle a “dreamy feel,” a “lost-edge quality,” and a sense that the “body mass is fading.” In the concept sketch, one could see a chair fading a bit into the background.

Next up was a doodle commemorating Ukraninan Independence Day on August 24, and then one for the 213th birthday of “Frankenstein” creator Mary Shelley on August 30. The Shelley doodle ran in the U.K. that day. In Lopez’s conception, the doodle depicted a hallway in Dr. Frankenstein’s home to pay homage to Shelley.

I thought why it was important to commemorate Shelley’s 213th birthday, rather than one with a rounder number. Lopez said that Google simply likes to celebrate anniversaries and birthdays. “We’re not going to wait for a big, round number,” Lopez said. “We want to do it now.”

Of course, as Germick put it, by celebrating birthdays like Shelley’s 213th, it maintains the “element of surprise…We want to be somewhat serendipitous.”

Buckyball
After discussing a couple of more potential doodles, it was time to see some early concepts for a doodle celebrating the 25th anniversary of the discovery of buckminster fullerene, a molecule that, Wikipedia says, is “composed entirely of carbon, in the form of a hollow sphere, ellipsoid, or tube.” Spherical fullerenes are known as “Buckyballs” because these compositions have some of the same elements as geodesic domes, which were invented by Buckminster Fuller. 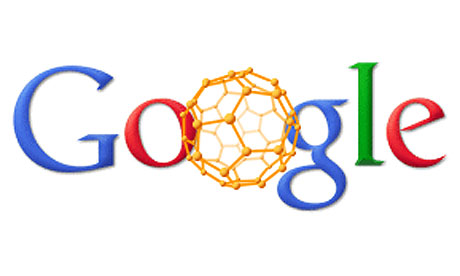 This logo was created to commemorate the 25th anniversary of the discovery of buckminster fullerene.

These molecules are commonly used in science, particularly in materials science, nanotechnology, and electronics, according to Wikipedia, yet they are also seen in the design of many different kinds of soccer balls.

That’s why, when Hom began drawing her concept for a Buckyball doodle on the whiteboard, she incorporated what looked to everyone like a soccer ball. “Let’s just re-use the World Cup doodle,” someone joked.

Hom explained that she was thinking of two different ideas for the final design. One was slightly interactive, she said, and would feature a tiny particle rotating in circular motion around the fullerene. “Hopefully, this would spark user interest,” she said, “and they’d mouse over it. And when they do, it would zoom in to a gigantic Buckyball. The user’s mouse would cause it to rotate and spin.”

She said that if that approach wasn’t appealing to the team, she had also been conceiving of a static doodle.

I asked about the animation in her interactive idea. Germick said if they went in that direction, they’d “probably try to con an engineer into working with us in their 20 percent time.” He was referring to the Google tradition of giving employees 20 percent of their work time to address personal projects.

“Some of the people I’m talking to about animating this are Buckminster Fuller fanatics,” Hom said.

Indeed, she said that working on the project had felt like being in school because she felt a lot of pressure to get it right. “If I get it wrong,” she said, “then everyone’s going to be upset.”

So you might have noticed they did not used just normal image animations but used Ajax/JS utilizing the power of HTML5 in making that BuckyBall interact with our mouse movements.