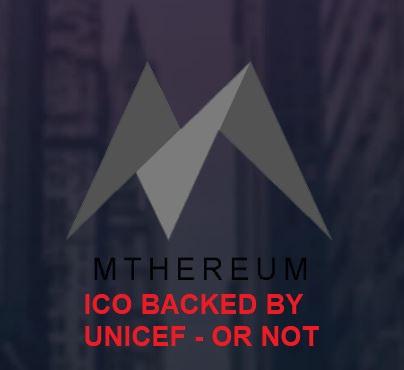 This post will cover all that we know about Mthereum and what this “token” is really made off , Usually I do not cover ICO reviews on my blog rather I do it at Ask Techie! but the hubristic attitude of the founders of Mthereum forced me to write this post in glory of another ERC20 token, known as “Mthereum” [MTE]. Aim of this post is to highlight all the aspects which such upcoming websites “intentionally” miss out.

Update [22 January 2019] : Mthereum Website is Infected with Notification Subscription and Popup Malware while the only exchange I could find “MTE” is listed on BTC pair at an exchange rate of 0.0000 BTC. You may read the article and the comments how their devs tried to lie and confront me with their lies. I hope many might have not invested in this project when I wrote about it one year back.

Update 2 [May 2019] : After realizing the bad name this “scam” Mthereum has brought for the founders like Dr Noore Hrum and Yousra Anwar , they have decided to close the website mthereum.io. What bothers me is not that they tried to scam people but the fact that they relentlessly defended this scam even in front of me. The act of being shameless is what make such people the trash of this world. Once realizing that they won’t be making anything out of this coin, they closed the website (ofcourse after making it go through cheap popup’s as stated in above update) but you can always visit the Archive of Mthereum. This action of theirs will and should haunt them for life until they publicly accept and apologize

Must Read:  All you need to know about Xiaomi S1 and S1 Active Smartwatch

Mthereum claims to be a Blockchain Charity along with a Healthcare and Payment System. Mthereum tries to solve the discrepancies in “charity based donations” involving fiat, which has a natural flaw not allowing anyone to know where the donations GO and from where they COME. Blockchain can solve all that if properly “implemented”.

ZERO Marks for creativity who ever opted for “Mthereum” as Token name. Lets dig into this coin so you may come to a conclusion

During any ICO the only convincing factor you have to decide the credibility of a token / coin is its TEAM, Any team behind the ICO is almost as important as its whitepaper and concept.

Mthereum has 4 people listed under “Team” and another 4 listed under “Advisor and Consultants“. Two people from the list claim to be “Founder of Mthereum” and no one else has listed Mthereum or shown any association with the ICO in their social media accounts. Lets dwell on all the listed individuals so you may have clarity on their portfolios

Co-founded at age 40 Mthereum Coin, a new disruptive crypto currency to bring transparency and traceability on the non profit sector

Although the amount of achivements he has listed on his LinkedIn and the fact you can not trace him down makes me think if he even exists but not listing him under the title he deserves (if its legit) makes it even more weird.

Lets see what we find out on the mthereum.io and ico.mthereum.io domains and how well it is , I will cover the security aspect as it speaks of the professionalism of the Team

The number of flaws in just their website should make you take a step back or hit the close button on their website but as a review can not be with going through the whitepaper, so lets see what their Whitepaper has to offer.

Earlier when I was requested to perform a security audit of their website, I did look at their whitepaper and shared the same and came the reply “k” (The reason of this REVIEW ). Their whitepaper was so messed up that I couldn’t read beyond 3 pages and it turns out they have removed most of the things I highlighted. Their initial whitepaper stated that Mthereum was conceived and developed by UNICEF. Do I need to explain more on the scam this ICO is trying to pull by calling this Token a product of UNICEF. They have removed those lines from their latest Whitepaper available on the website , but I have the Old Whitepaper Uploaded or you can view it from Google Cache

Whitepaper is full with words like : Mthereum-Coin, MthereumChain, high-pro-file, Head-lines , accord-ing , in-stitutions. They used some language converter? because these basic errors are very clumsy and shouldn’t be there

Over 40,000 bidders within the community will be required to purchase and keep Mthereum Coin tokens in order to participate in the most catastrophic situation worldwide

Team is wanting for an “catastrophic” situation ? The above sentence doesn’t even make any sense and the whole whitepaper is like this, it give headaches just going through a line of it .

What you expect I will tell you here ? They are using a non dedicated server, their sites are hosted on IP 23.91.68.121 with a bunch of open ports including DNS and SSH port

Their website has directory listing enabled at the time of writing this post , which can be verified here . They even have backupbuddy_backups installed and visible , its a matter of time before they loss their WordPress db (who knows they already have,eh ? )

You can view Mthereum ERC20 Token Details. Nothing fancy here as I have stated in many of my previous reviews, making an ERC20 token takes an hour.

While going through Mthereum Servers I found many images which weren’t used the current website, so i started searching people associated with those images and found few, after asking them as “why they are no more part of the team” something shocking came up. I will list the summary of what I have learnt from this individuals

Mthereum Charity with no Compassion

Its very much certain that Mthereum has got nothing to do with charity and all its media presence is fake and false. They even posted an article on their blog stating that Mthereum is helping Refugees, again this is false with no actual evidence supporting their claims. Using charity to fuel your ICO is the worst of ICO Scams I have seen.

That post is real as well. We have a group people those are going there and MTE will definitely donate a good part.

If you read the blog post it states that MTE is already helping and the founder says “are going there” and “will definitely donate a good part”  so Founder of Mthereum , a transparent charity token can not be transparent about who is going where , helping whom and donating what ?

Another Shit ICO and nothing else, but i would ask you something . If you have participated in this ICO what was the reason that you did ? If you did not why ? and What you think about the ICO after reading this very thorough review?

Stay safe and let others know how people scam in this beautiful world of ugly shit people.