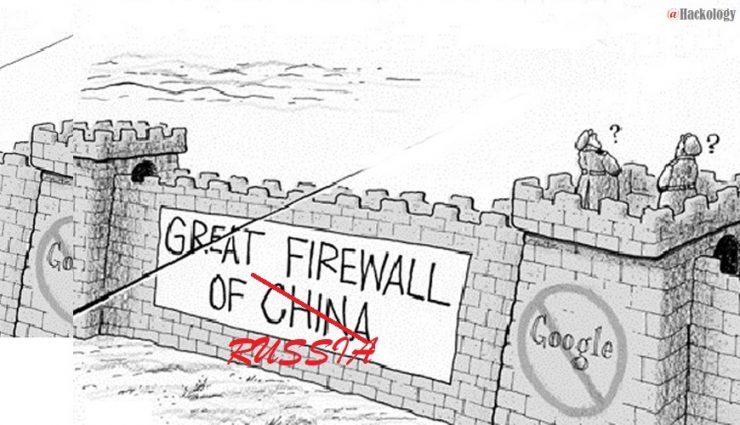 Russia has successfully tested a country-wide alternative to the global internet, Splinternet. Russia’s Ministry of Communications announced that it has successfully conducted tests on a countrywide scale with their alternative to the internet. How this network functions isn’t clear as of of yet, but the Ministry of Communications claims that users didn’t notice any changes to their typical web use during the testing phase.

Countries like Iran and Saudi Arabia have censored anything the government desires and the citizens can not witness the same. However what Russia is trying to achieve is not just censorship, rather it will be routing and sifting through all the internet traffic of the country and whenever they want to block certain traffic which can fine tuned to even a single URI or a certain meta-data, the country can do that. Such methods

Russia’s Internet blocking / censoring project is nicknamed Runet — lets the government filter content through its own censors. Currently the details are not clear as to what extent the country is willing to go but as per the rumours the test was conducted on country wide internet services. Although that wouldn’t mean that the whole nation was taken up on the test but it would mean that the internet international gateway was directly plugged in their test sessions, meaning Russia is planning to implement this for good.

Countries receive foreign web services via undersea cables or “nodes”. These would need to be blocked or at least regulated. This would require the co-operation of domestic ISPs and would be much easier to achieve if there were just a handful of state-owned firms involved. The more networks and connections a country has, the more difficult it is to control access.

Runet would get ISPs and telcos to configure the internet within their borders as a gigantic intranet, just like a large corporation does.

Professor Alan Woodward, a computer scientist at the University of Surrey

This type of infrastructure would even make it difficult for VPNs to access blocked content. With all that said, it’s difficult to tell just how successful this test was, or how far along Russia is in its goal to create its own Great Firewall. One of the benefits of effectively turning all internet access into a government-controlled walled garden, is that virtual private networks (VPNs), often used to circumvent blocks, would not work.

Must Read:  WhatsApp Adopts a New Approach to Fight Spam

Project Runet To Read Everything

No matter how alarming such means of control over communication are, it does not mean that Russia will be able to read all sorts of encrypted conversations and traffic of the citizens. Although, meta-data analysis and deep packet inspection will still be able to reveal a thing or two and once done with due-diligence it gives away alot but encryption is still the way to go about.

Technologists have theorized about a “splinternet” for nearly 20 years. While certain governments have tried to control how their citizens communicate and what content they can access, the world wide web has yet to fracture into a multitude of closed-off national webs. But as superpowers like China and Russia learn to balkanized their infrastructure, more nations could follow, and the internet could look very different down the road. It is now not impossible to have a regional version of all the famous websites we use where it can only be used to communicate with people with in the country. Splinternet is against the core values of internet and connectivity which it offered everyone on this planet.