SegWit2X comes back as Scam2X

UPDATE 5 – 22nd Jan 2018 : Segwit2x Wallet seems to work eventually, if the initial sync doesn’t work you may delete and restart the process. Only Extrates and YoBit have started initial support no other exchange will be considering it for now as there has been no submission by the Team – lacks criteria fulfillment

UPDATE 4 – 1st Jan 2018 : Still no working wallet, no block explorer and people are still not able to sync their wallets. A total mess , I would be very careful while interacting with sites which offer “SegWit2x Wallets” etc

UPDATE 3.1 : Official Segwit2x B2X Wallet has been Released. I’ll give this a thorough scan before I consider to use this.

UPDATE 3 – 29 December 2017 : Team of Segwit2x said that they will launch Wallets today. Mining on the Official pool also give reward “” . So let see if at they fix their “fork”

UPDATE 2 : Admins of Segwit2x have left their Official Telegram Channels – I do not think we will be seeing them anytime soon , they might be trying now to pull off their “Exit Strategy”

UPDATE : So called Segwit2x mainnet has been launched but apparently no one can mine anything nor there is any Wallet so no one can claim their B2X Wallet Address, even if you could I wouldn’t Recommend That. Official Pool of Segwit2x is showing mining at lightening speed of some currency while the addresses are all BTC Wallets (Non Segwit2x) .I would suggest DO NOT Buy this coin as it being dumped (saw some buy orders on YOBIT)

Must Read:  Telegram Crypto Dump To Reveal True Faces of Many Influencers

Hard Forks are not new for Bitcoin, but this particular SegWit2X fork is very interesting for many reasons and it took some time and research. I’ll get down by listing what all there is to know about the Segwit2x fork planned at block 501451 which will happen on 28th December 2017.

Working to find out the truth behind Segwit2x

Is Segwit2x Team same which planned a Fork in November ?

Just 8 days before the Launch of Segwit2x, on 8 November Segwit2x Fork was cancelled by Bitgo CEO, Mike Belshe and he stated that a consensus could not be reached and thus the fork is called off. So why have another SegWit2x Fork just after a month ? This time the previous team is NOT related with the Fork.

A Post was made on 16 December on BitcoinTalk.org from a new user account with “_Segwit2x_” handle, where the SegWit2x was announced.

Let me dig deep into the Team of the this fork

A screenshot of their website team tab taken on 19 December shows Sairam Jetty as Team Lead Developer and Donna Khyuz as Business Developer while Jaap Terlouw is Founder of Project.

As of now they have removed Sairam Jetty as Sairam Jetty was not even knowing that he was added as part of Segwit2x Team and Team Lead Developer role and added Robert Scabo as a Core Developer.

while exploring @Segwit_2X web directories, i found an older version which still lists Sairam Jetty while its linked to "Macro Zomer" on LinkedInhttps://t.co/1nbbMnwjHS (have taken a web.archive copy)
whats with you guys ?
#segwit2x#scam pic.twitter.com/Oa6778ay2X

First of all they have not mentioned it on their website or anywhere else that they will be pre-mining 2,000,000 (that makes 9.5% of total coins), way to go, Wallet Addresses used in code are : 18wFZB62chDhYdapBnVEXX4y9hUvWs8yRu , mh7CayYx3J8ofEU5zSZPqJJV65d8ijkJpm , ms17iABVQf7RQB8iaxeXPBkFdQQjCv7CmV (I would appreciate someone to update me that who owns which wallet ) 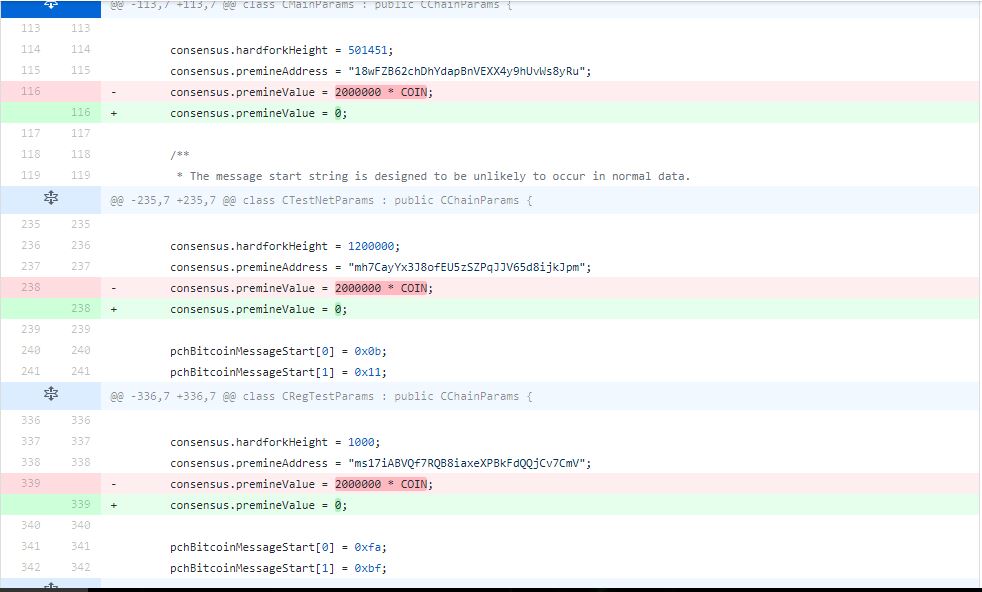 The initial post by Jaap on Bitcointalk.org stated in their roadmap that they will introduce ‘Ethereum Smart Contracts‘ in step 06, which you can still see on Internet Archive

when asked about the above Jaap replied by saying “Hello. Thanks for your question.
No, we have revised our plans, this won’t be Ethereum based smart contract. You can check our Roadmap now” but later Jaap states that “1. It was a mistake of designer and it was fixed.” So you guys made a mistake with your Roadmap ? commitment to the cause eh.

Free B2X and BTCs from Satoshi Nakamoto, WHAT

I promise that all BTC holders will receive not only B2X in the ratio of 1 to 1, but also a proportional number of Satoshi Nakamoto`s Bitcoins as a reward for their commitment to progress.

I have no idea how they will get hold of BTC held by Satoshi Nakamoto , the claims are weird and interesting at the same time

I think its enough fact finding to establish that this is a probable scam using the name of Segwit2x with no serious team behind the project.

The idea of the team headed by Jaap is to resume and refine the suspended Segwit2X project and create a “really anonymous and instant bitcoin.”

It is claimed that the purpose of the work is not the replacement of the original network, but the effective coexistence of two networks with different purposes.

Also, according to the roadmap, these are planned improvements:

If you are still interested in getting the free share of B2X, all exchanges which initially expressed willingness to support Segwit2x which was to happen in November will support B2X, currently the following exchanges support them. NO EXCHANGE WILL BE SUPPORTING IT DUE TO LACK OF DEVELOPERS UNDERSTANDING OF THEIR OWN COIN