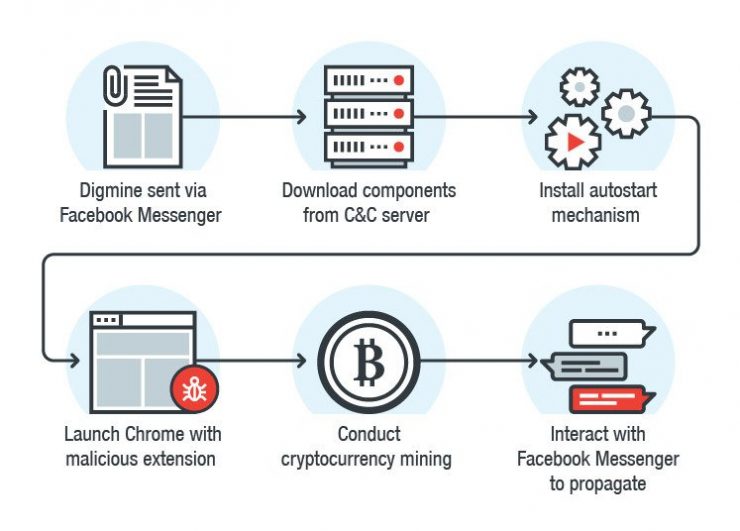 People are going crazy for cryptocurrencies as it almost takes over the financial market, undoubtedly blockchain technology is replacing the current world with a digital world, but we need to be convinced that the digital world is more vulnerable to cyber attacks and hackers are always finding a way to make money out of security weaknesses.

Recently, A Facebook Messenger malware named “Digmine” was spread across the world and people were getting trapped into it. It wasn’t a usual malware which harms the computer files and encrypt them, it was actually a miner which spreads in a form of zip file from user to user thus computer to computer. This malware uses your CPU power to mine a coin known as Monero which is currently trading at 350$.

DigMine File Structure and how its spread through Facebook Messenger

The methodology which is used to spread this malware is quit effective for the hackers, once a computer is infected, it sends the malware file to all the contacts in messenger and from there it spreads to their friends of friends and the chain just goes viral.

How to be safe from DigMine Malware?

The methods to stay safe from DigMine Malware are actually simple, just follow these steps

The second way is to install SandBoxie and open your doubted files there, it won’t let the malware hurt your PC and will show you all the processes. You can also consider using VPN proxy software for Facebook for additional security.