As our smartphones improve camera technology, it brings innovations to the consumer apps, in form of Face Change Apps. Face Change Apps allow you to switch your face with a friend or a photo in real-time. Sometimes the image produced is funny and sometimes bizarre, Nonetheless it is always entertaining. Let’s see some of Android and iOS Best Face Change Apps as I shortlist the Top 9 Face Changing Apps.

Snapchat offers features not just limited to face changing as it is a social media app meant for sharing snaps among friends, if you are looking for an app just for face changing features you may find some useful and light app from our list: Keep reading

Contrary to all the other apps in the market, where you need to take a new picture using your phone camera to enable the features of face swap or changing; Microsoft Face Swap allows you to change almost anything from your face. Yes, almost anything.

Take a new image or select one from gallery which has a face, tune it a little, and then use keywords to locate an image from the Internet where you can replace your face. It could be a famous celebrity, an animal, an astronaut or even a wall. If I search an image from the internet, that I want to look alike, and paste my face in this app. The skin tone and texture are automatically adjusted to the environment. I can rotate and expand my face to fit the frame if it’s not properly aligned.

The app has been well constructed and the automatic face change is not perfect for every frame, luckily you can always align the pictures manually to different sizes of the frame. If it had an option to record videos, it would have been entertaining.

[ July 2019 – Update] FaceApp has gone viral due to a recent #faceappchallenge and as it got famous people have started questioning the privacy policies set by the app, most of the claims are coming from USA as the App founders are Russians and both these countries don’t go along well. So enjoy the App

One of the most popular applications on the list is FaceApp by FaceApp Inc. Although it has no face swap function, it does offer features other than those of any of the above applications.

You will begin by taking a natural picture of yourself, then you can smile, look older or younger, change your sex, change your hair color and even wear different glasses. FaceApp claims to use Artificial Intelligence for their process . The latest reports suggest that the App indeed uses AI to give the perfect filter effects. Although any data you share with the app can be used by them the way they seem fit

Some features are locked and available only in the pro version. I want to recommend this app to anyone who wants a good face change app having free filters. There are no ads and in-app purchases available in the app.

Face Swap does much more than just face changing or swapping, unlike its name. It has many features, filters and is a good image editor. You can edit a basic picture like add sticker, text, crop, adjust, color, etc.

As with all face changing apps real-time masks are supported and images from the gallery can be manipulated and several faces swapped in a picture. Clone face is an interesting feature that clones a face to many in the picture that produces funny results. This app also has a cosplay option, where you can dress yourself up like famous celebrities. 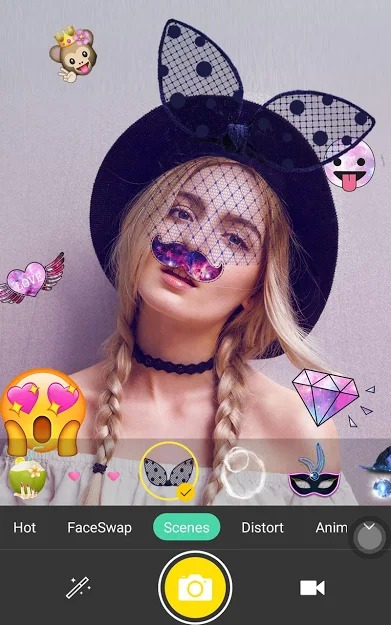 This app detects two faces automatically on the camera front and swaps them to obtain funny and horrific results. A girlfriend swaps her face to know how her boyfriend looks in her body. Take photographs or videos and swap in real time with friends or celebrities. The app is still a beta version of the Android version.

Another fun small app: Cupace, which offers face change functions. Cupace allows you to extract the face of an image manually and then paste it into other images, unlike Snapchat. At times automated features fail to properly identify your face and you wish that there was a manual editing feature allowing you to tweak selection for the best face changing experience and this is where Cupace takes a lead.

It takes three stages–cutting a face, choosing an image, and pasting the face to the image. The tool for face cutting offers a wider view so that part of your ear cannot be missed. After the crop, the faces are saved and you can start pasting the cutouts on the faces of other people.

It is easy to adjust the face to fit and to zoom in and out, but unfortunately you can not zoom in the background image. You can use the app directly to share your photos with friends in social media. Overall, the app works all right but lacks a great auto face detection feature.

Facebook’s answer to Snapchat Face changing Function was when they bought Masquerade Technologies Inc which came along with MSQRD (pronounced masquerade) App, MSQRD is a video selfie app which allows you to mess around your face in a video or an image.

You can take a selfie or record a 30-second video once you start the app. The app can use effects on videos in real time, after swiping between different video effects. Start the video recording once you find what you were looking for. The app captures audio as well as video. The capture stops after 45 sec and can be shared on Facebook, Instagram, WhatsApp or even the video file can be exported.

The app looks decent overall but currently isn’t publicized much by Facebook, maybe they are waiting for something ?

Yes, this isn’t a typo, this app’s true name is MRRMRR. However, this app has many cool filters. Mrrmrr is a DeepAR powered face changing app that also offers filters and masks in real – time.

It includes four categories, masks, emoji, filters and effects. Emoji has limited options with only three variations. With this application you can be an animated emoji, Donald Trump or Kanye West. With its real-time algorithm for tracking the face. It captures and applies your facial movements to the emoji to create an interactive emoji. The masks offer certain uniqueness such as rainbow drool, sunburn, cat ears, goth, anime, soda caps and so on.

You can take either a photograph or a video on the masks. Sharing the photos is very simple, with a preview and several social media buttons, such as Facebook, Instagram, Twitter etc, after each capture. Alternatively, you can save the picture directly on to the photo folder.

You can take selfies or import pictures from the phone’s gallery. It has Morph heads such as skinny, fat, and others. Add face parts (funny eyes, noses, crazy hats, and more), 600 stickers, silly glasses, different backgrounds and hundreds of accessories.

Which is your favourite Face Changing App ? These are some of the best face app which we have shared I am sure there isn’t another App out there which is also a gender change app. Have you discovered some awesome filter among these face changing camera apps ? do share with us so we can make some awesome and funny faces and share them among friends for a good laugh.