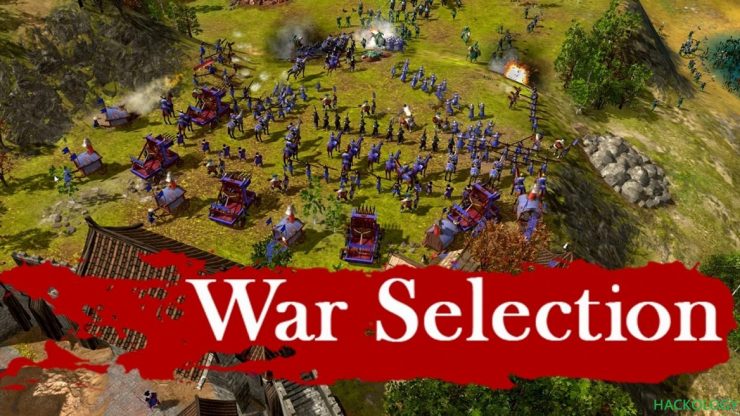 War selection is a free to play real-time strategy (RTS) game. Currently, the game is in Early Access thus free for us to play. A lot of updates are being rolled out to add extra features and to make the game perfect. You can also check out the post showing the upcoming features of War Selection Game. Here is the War Selection review and guide:

War selection is a very unique game with its own new ideas and offers many things for every type of player. War selection has also introduced new modes which are “Battle Royale inspired Armageddon modes“. In this Armageddon mode a single-player or a team of players has to work hard to expand their boundaries. After a certain time meteorites will destroy the ones with the smallest areas. These ideas are original and fun which make the game enjoyable. This game provides you the option to play along 61 other players in a single map! The character animations are on point and the visuals of the game are pleasing. There are a lot of animals in this game which add a realistic touch. However the game is mostly based on land and not water because the absence of transport ships do not allow for land units to move across the water.

There are 9 modes in war selection for everyone to enjoy

There are 6 types of armour in the game:

If you are ever wondering what type of armour do the animals have and how many are they:

Hint: Militiamen can be recruited in houses of Eastern Europe

In the stone age avoid fighting with animals at all costs. You will start with 10 workers and can make 2 more workers. Make those 2 workers send one to build a house and the other to cut trees. Slowly keep increasing population but remember that keep 6-7 workers picking berries and the rest of the workers should be getting wood. After 20 population make a temple. Keep increasing wood, food will not be of that much importance for now so focus on getting wood. Usually people would tell you to wait for 50 population but I would recommend to get to Bronze age at maximum 30 population. That is because berries are very limited and sometimes you don’t have access to deer or cows. Getting to Bronze age early will allow you to make your own farm. During this time only one barracks should be enough.

Keep increasing population drastically. Your main aim should be of increasing workers to get resources. I usually go for 60 population, sometimes above and move to the next age. I would also recommend that in this age you should start building towers. Watchtowers are not very useful, make security towers. They have a good amount of health and can deal good damage. Place these towers near your base because that is the place you are trying to protect and if the enemy tries to attack it is the only place his troops will stay longer as compared to remote areas. Making security watchtowers is also good at places where you have seen most enemy activity or suspect enemy base, good for intel and light damage. 15 workers getting food will be enough. One farm will be enough for the whole game. I recommend going for stones (wood deposits) because they stay at one location. As you start going for wood from trees they slowly increase the distance between the warehouse which is less efficient than stone. Depending on your needs you have to choose to explore the area such as less copper or stone deposits. 20+ workers on copper, 20+ workers and 15 for food. 2-3 Barracks are a must.

At this age you should get to atleast 100 workers and 25-30 troops before moving on to the next stage. 5 Barracks and others are of utmost importance because you have 70% chances of being attacked at this age. Security towers should have been built! They can be near the farthest place your workers are and also near your base, hard to destroy and decent damage.

In the middle ages I recommend to rush to the Industrial age as fast as you can. Build cannons in this age. Explosive damage from longer range not only deal more damage but they also damage multiple targets.

Industrial age is to be rushed because the barracks and other troop training centres take very less damage from troops of middle ages and below. Same goes for the units such as armoured tanks and cannons. Armoured tanks will obliterate enemy troops. At this age if you rush the enemy with 6 armoured cars and 4 cannons the enemy will surely be wiped out of history or will take devastating damage.

This age would give you better tanks and if you have gotten this far you might as well go for the wonder if your enemy is strong. In case the enemies are weak you can keep destroying their base and leaving enough so that they don’t lose! (for fun if you want). After Industrial Age 2 you can build a wonder. Building this wonder will start a countdown (20 mins), after this time runs out you will win but be careful as many will try to destroy it.

Now what to choose Europe or Asia at Bronze age? These War Selection factions are very important so choose wisely according to your strategy (War Selection buildings and units are compiled here). Here is a brief comparison

The main difference between these is that Europe is costlier and time consuming but stronger unlike Asia who are cheaper and take less time but weaker. Asian barracks can also accumulate troops however European need to wait for some time to build another troop. Another important thing is that Asian siege units can be built anywhere using workers but European siege units can only be built at workshops. It is quality (Europe) vs quantity (Asia).

Now after getting into these ages they will further diverge into two and you will have to choose one of them.

Note: This game is in Early access which means some or many stuff in this game might change. Also there are currently two paths but there might be addition of Indians and Africans too.

Fog of War will not be there. In the map you will see townhalls of every person. If you have seen an enemy player’s base/buildings then you will keep seeing them and they will never disappear. Beware that without fog of war animals will not be shown. If you scout and have seen a particular area of the enemies base, it will remain visible no matter what. You can see town halls in minimap, and if fog of war is not there so any resources and environment can be seen except animals and units. Buildings can be also seen because it shows constructed stuff on the ground when we haven’t been there. You won’t see enemy units gathering wood but you will see trees falling or anything they do with the environment

How to Disable Fog of War in War Selection

The procedure to have a view of the full map during online game of War selection requires you to change a file in your installed game directory, Let me do a step by step procedure which will allow you to disable fog of war and see every other player in the game.

Notes: If the game is updated then placing these files in game might not run the game and it may crash/close. Comment here so that we may know about status of hack. Don’t be afraid you will never be banned!

Note: Some users reported that the game stopped working with the Hack, so an updated hack has been published. The hack was working fine and last checked on 10th April 2020. But due to some issues, there are a few notices. Go to our discord for more info.

Join our Discord for future updates and to get in touch with us: https://discord.gg/ydAs7kQ

In the end it all comes down to who has mastered his chosen path. Try each path and all tactics. Go for the wonder or go destroying enemy bases. Try the rush technique or wait for the right moment. Feel free to comment your choices, techniques, and opinions in the comments. Now go and fight some wars!