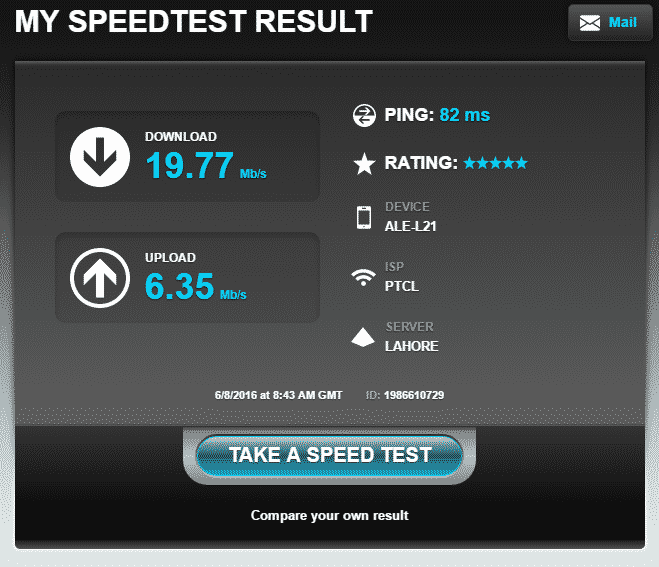 After my disappointing experience with my previous Charji Cloud , I was forced to look for alternative options. Couldn’t settle for anything less than a 4G, so my only options were Zong and PTCL. Zong ruled itself out during my test use due to its Unethical Tactics. PTCL EVDO was all that I was left with, I got the PTCL EVDO Charji Cloud R600A which is a product of GadgeIT, with hopes that it will prove a better hardware than Huawei. The device has a limited display comprising of  Power , WiFi  & Signal indicators. All have different colour LED’s which indicate battery life ,WiFi devices connected and Signal Strength.Details are explained in the brochure which comes in its packing. The most interesting thing I noticed was the interface which was really exotic and felt good to the eyes.The Web Admin panel with all its fancy looks lagged and it was not very responsive.

I conducted a SpeedTest on one of my cellular device while connecting to the new 4G device and the Results were not that bad either.

GadgeIT PTCL Cloud R600A can be unlocked so that we can use Data SIMs of any other cellular company and not be bound to PTCL only.Procedure:

I have asked for PTCL permission, allowing me to provide unlock tutorial to you guys. Currently waiting for their response, although they sell Locked Devices but there is no restriction in unlocking the device nor its illegal (warranty gets void), I will update this place with the Unlock Code and you can ask for you device as well once response is received from PTCL. Comment below or subscribe so once response arrives I can let you know pronto.

Few drawbacks I noticed during my use are :